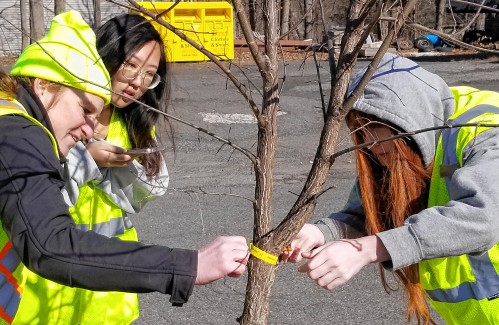 EASTHAMPTON — The city is on the way to a better understanding of its public shade trees after more than 40 volunteers fanned out across the city center to begin examining them on Saturday morning.

As part of their inspection, the volunteers cataloged the size, species and general condition of 200 public shade trees in urban residential areas and the commercial center of Easthampton. The tree inventory event was the first of its kind for the city, according to Department of Public Works Director Greg Nuttelman.

Volunteers gathered outside the municipal building at 9 a.m. to get their cards and team assignments before being divided into 13 groups. Each group was led by team captains, including city tree keeper Sarah Greenleaf, who also works for the state Department of Conservation and Recreation through the Greening the Gateway Cities program; Bob Alrich, arborist and owner of Northampton-based Warner Tree Service; retired arborist Jay Girard; Nick Brazee, plant pathologist at the University of Massachusetts at Amherst; and Yoni Glogower, Director of Conservation and Sustainability for the City of Holyoke.

The event was born out of a collaborative effort between the DPW, Greenleaf and Lilly Lombard of Northampton.

Eight years ago, Lombard, a longtime climate activist, connected with the state’s community and urban forester, Mollie Freilicher, and worked together to lead an all-volunteer tree inventory in Northampton. The inventory event revealed that Northampton has “nearly 10,000 public shade trees worth $16 million, providing $1.3 million a year in energy savings, carbon sequestration, stormwater mitigation and increased property values”. These efforts have led to the adoption of a comprehensive municipal shade tree program and the investment of significant funds in reforesting Northampton’s streets and building its climate resilience, she said.

Lombard, who is an arborist major at the University of Massachusetts Amherst, is currently in a class that asks his students to create a sample survey and management plan. The first step in successfully managing an urban forest is to conduct a tree inventory, she said.

“I didn’t just want to do an academic exercise. I wanted something that would have real impact,” she said. “So I contacted the Easthampton DPW and their new tree caretaker.”

The event also included four volunteer staff members and 19 Wilbraham & Monson Academy students, such as 18-year-old Nina Lau. Originally from Hong Kong, Lau is a member of the school’s Community Service Team, an after-school group that volunteers its time to perform service-related activities at local soup kitchens and pantries, and raises awareness. and funds causes.

“I really love being able to help others and the community,” she said.

Lau joined fellow student Delaney Johnson, 17, and Greenleaf on a data collection hunt near Lyman Avenue. With guidance from Greenleaf, Johnson and Lau identified and assessed tree health and entered data into a software tool called i-Tree. The software includes a suite of several applications that focus on the benefits of urban trees that were developed by the US Department of Agriculture Forest Service.

Easthampton’s public shade trees are located along roads and can be found in tree pits, such as those along Union and Cottage streets, and in tree belts, such as tall maples and hickories along the sidewalk of Park Street. They also exist along private property where they meet the road or sidewalk. State law governs the preservation and operations of public shade trees throughout Massachusetts.

The loss of the urban canopy can lead to increased energy costs and air pollution levels, Lombard said.

“The best way to convince a city to invest in trees is to demonstrate their value in terms of the services they provide…You can’t value what you have if you don’t know what you have,” said she declared. “I wanted to bring that model of success (which we had at Northampton) to Easthampton.”

Emily Thurlow can be contacted at [email protected]